When Cheryl joined the Fire and Rescue Service, it was before computers; pen and paper were the main tools of the job

Cheryl tells us in her own words why celebrating and highlighting the control rooms with International Control Room Week is a good idea….

When I joined the Fire and Rescue Service in the dark ages of November 1980, it was life before computers; pen and paper were the main tools of the job alongside the Post Office VFA system for alerting retained crews, a microfiche system for looking up pre-determined attendances and tannoy system for whole time crews.  Based on a fire station, we were one up from the old watch rooms and if anyone does fancy checking my facts, try the Fire Service Drill Book 10, Communications.  And yes, it is still available!!

There was very little recognition or appreciation of the role Control played in the main scheme of things, always warm words from the watch though unless we got it wrong and then there was a gentle cuff. When  moved to a computerised contro I think then the penny started to drop about the value and role of people in the Control, but it has certainly taken decades for its actual contributions to be wider recognised  The added value of the information which could be extracted from callers to give to crews, we were their ears and mouthpiece until they arrived.  The added value of responding to information from 999 callers and making assessments about additional resources along with ensuring the county had fire cover in place to deal with future calls.  The ‘go to’ people who knew a lot about the organisation, knew lots of people and if they didn’t know, knew where to go or who to find the information.  The people who detected a quiver, or a sentence from a crew member which indicated all was not well and alerted someone in confidence to help them.  The people who knew how to handle callers, a soft tone or a firmer one, directing the order of information or allowing it to flow.  The kind words of reassurance that the Fire & Rescue Service will be there.  And being temporary firefighters in the case of providing fire survival advice, keeping the caller on the line for as long as needed and giving them information dependant on their circumstance to keep them safe. The multi tasking of switching between incidents and scenarios whilst keeping on top of it all.  Heroes in headsets as we now rightly describe our control staff.

I doubt any of this has changed over the years, except for there being more of it and much more difficult by the variety of governance models for controls and complexity of technology in an ever-changing world where budgets have, and are, being significantly reduced.  Has the penny finally dropped though……not fully I would imagine but the events in Manchester and then Grenfell have brought into sharp focus the role, the extraordinary value Control staff make and the difference they can bring about when the bureaucracy, strategic planning and enlightenment are all lined up in order to let them get on with the job.

I treasure the days and years spent in Control, the things I learned and experienced and those who kept me company on the shifts and long nights, the team work, camaraderie and then the wider relationships.  I despair at events which force decisions at the expense of public safety, the ‘control glass ceiling’ but I marvel again & again of the persistence, grit, determination, humble, humour modest, innovative and self-effacing manner of all those heroes in headsets.  Those with the ‘x’ factor, you can’t quite put your finger on it, but it stands out a mile.

Earlier this year I was asked by APD to be on a judge on the panel assessing all the nominations.  What an honour and privilege it was to read the citation, more often than not with tears in my eyes reading about the unsung heroes and how they had contributed to saving life, preserving crime scenes, going the extra mile and raising money for charities.  I was struck by the number of nominations from police and ambulances services and sincerely hope for 2019, we see an increase in the number of nominations from Fire & Rescue Services.

I treasure the days and years spent in Control, the things I learned and experienced and those who kept me company on the shifts, and long night, the team work, camaraderie and then the wider relationships

So to quote a well known music mogul …..do I like the idea, no, I absolutely love, love, love it.  It’s all yes’s from this particular panel member.

APD @apdcomms
13 hours ago
Wow - there are so many registrations for this years #InternationalControlRoomWeek...over 220 already and we've still got a week to go. If you've not registered please do soon - we have to be strict with our closing date this year https://t.co/ExRNacpnxF https://t.co/f3lQDtgVrr
View on Twitter 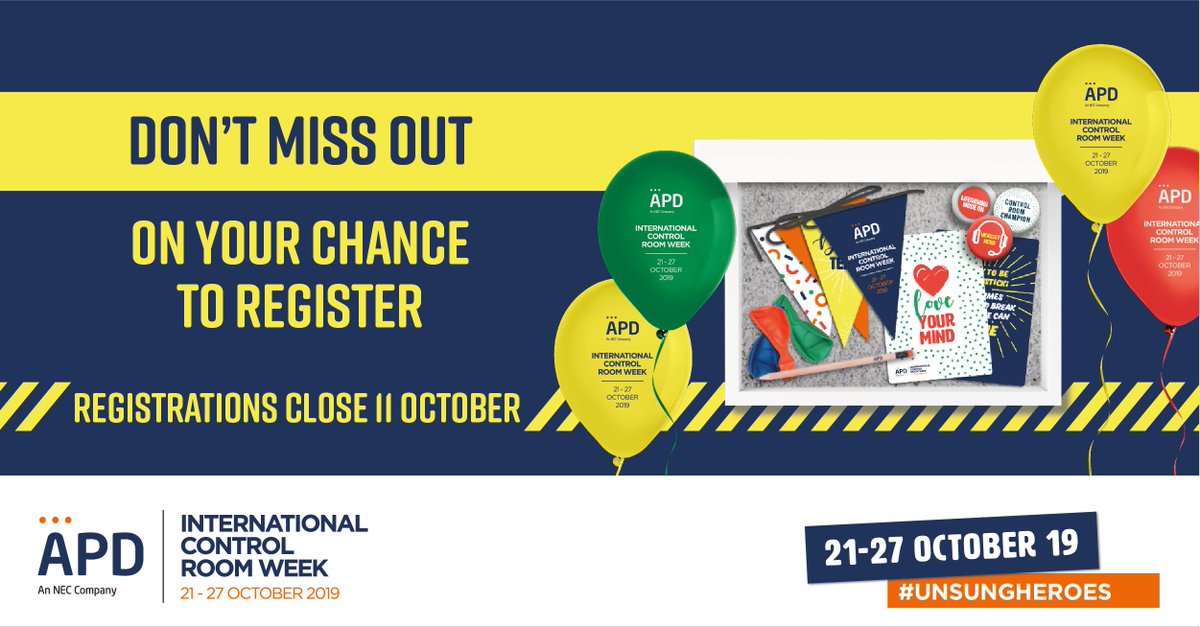 APD Communications20 hours ago
So this afternoon, we've added another lovely certificate to our awards corner at APD HQ. This time we were shortlisted for the Women in Tech Award for our awesome Commercial Director Rhiannon Beeson and the Marketing squad as Tech Team of the Year with Rhiannon, Kat Jeffery & Jane Cross.

So proud to be part of the thriving #digital #community here in our hometown of #Hull. Congrats to all finalists and winners from the 2019 Tech Awards! 🎉
View on Facebook